I was shopping around at this electronics liquidation store and stumbled upon a couple cheap buys: A “1900 mAh” external phone battery and another 4400 mAh pack (which will be the subject of another post and teardown). The batteries were originally priced at $7 and $38 respectively, but they were on sale at half price. For $3.50, I was curious enough about the 1900 mAh battery’s real capacity that I bought it anyway, expecting to be disappointed.

Front of the “Xtreme” battery pack

The pack itself is roughly half the size of a typical smartphone and about 1.5 times thicker. The casing itself has no screws; the manufacturer decided it was too expensive to use screws so they simply ultrasonic-welded the case shut. After about half an hour with a plastic spudger tool, I was able to crack the case open.

The soldering quality, surprisingly, is pretty good for a sub-$10 device, save for a bunch of hand-soldered components with flux residue left behind. The circuit board is made up of a battery protection circuit (yes, they actually put one in!), an ME2108A-50 boost converter,  something I’d assume to be a charging circuit, and an LM324 op-amp as a “gas gauge” (if you could even call it that!). 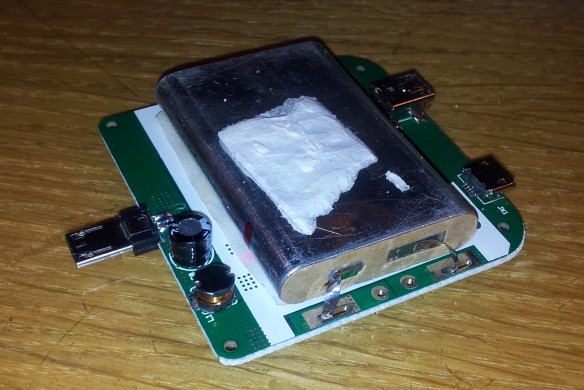 The cell appears to be a thicker version of a typical cell phone battery. It’s similar in size to something like a Nokia BL-5C which is a 1020 mAh cell, and is 5.6 mm thick. The cell in the charger is 7.7 mm thick. The charger’s cell is only 37.5% thicker but should have 190% of the capacity… yeah, no. This is not going to be very promising, given how the spot-welded nickel strips literally fell off the cell when I tried to desolder it from the PCB.

After soldering some 20-gauge solid wire to the terminals and hooking it up to a bq27425-G2A fuel gauge chip, I noticed that it reported that the fully-charged voltage is 4.25 volts. This charger tries to squeeze the most out of the cell by overcharging it! Granted, a Li-Ion cell’s maximum terminal voltage is 4.25 volts but it shouldn’t settle down to this voltage after charging!

After performing a few learning cycles to determine capacity and resistance, the cell holds merely 1370 mAh. The internal resistance is about 85 milliohms, which tells me that at least they used a relatively fresh cell in this charger and not just some recycled cell (*cough* UltraFire *cough*). 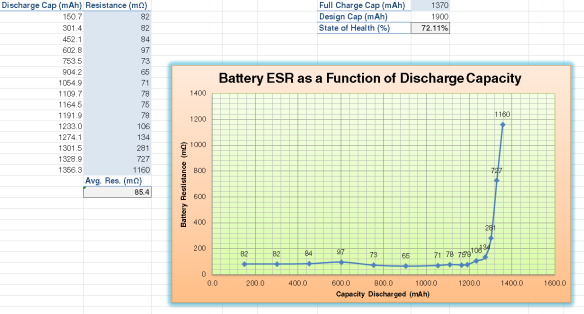 I knew from the get-go that this battery was going to be a let-down, and I was right. But hey, for $3.50 I get a half-decent 1370 mAh cell and a few scrap chips (no way I’m reusing that battery’s PCB as-is!). But my verdict: Avoid this battery pack if you intend to use it to, I dunno, charge your phone. 😛

1 thought on “Tearing down and analyzing a cheap-ass “Xtreme” $3.50 external phone battery”

This site uses Akismet to reduce spam. Learn how your comment data is processed.