It’s amazing – 894 days (and counting) have elapsed since the start of my long-term experiment, documenting the real-world self-discharge behavior of the Kentli 1.5V Li-ion AA battery… and it’s still ongoing! How have things fared so far? 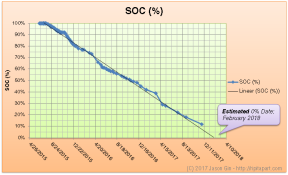 Surprisingly, even after spending nearly 30 months on the shelf, there is still 12% capacity left. The voltage has dropped from 4.216 to 3.692 volts according to my bq27621 Li-ion fuel gauge; the State of Charge (SoC) has dropped 50% since my last update.

The linear end date prediction is holding pretty steady, having changed slightly to an estimated 0% charge date somewhere in February 2018.

On that note, I’m impressed by how much attention this little battery has received, even years after my initial review. Every day I see a handful of views checking out the teardown and performance metrics, and there seems to be hardly any sign that this will change anytime soon. To everyone who stops by to check out my blog posts: thank you! 🙂

I’ve finally done it – I took the plunge and tried to find out if I can enable advertisements on my blog (*gasp*) through the WordAds program – and as it turns out, yes!

Given what I’ve seen online, WordPress has always been vague on one of their acceptance criteria: views per month. They state on their own FAQ that they require “thousands of pageviews each month to earn meaningful revenue”. There were no clear answers from other bloggers either. In my case, I’ve had a paltry 8,000 views/month on average ever since I registered my domain, ripitapart.com (I had over 10,000 views/month when I was using the free WordPress domain). Given that I tend to blog about relatively niche topics (who really cares about battery fuel gauges, anyway?), this is not particularly unexpected; this isn’t helped by the fact I haven’t been posting frequently as of late (so far I have dozens of draft posts, with some that probably won’t be completed as they have essentially gone ‘stale’).

I submitted an application request for the WordAds program on November 20, 2017. Immediately after filling out the form I was given an automated message that I was initially declined due to insufficient viewership (but they would keep my request open until I had achieved enough page views per month). However, the next morning I awoke to an email that read “Welcome to WordAds!” – a pretty nice way to start the day. I’m guessing that the number of outstanding applicants were low, and that my content is original enough to warrant acceptance into the WordAds program. Perhaps there is a manual component to reviewing these applications?

So, what about earnings?

Given that it hasn’t even been a week since I was accepted into WordAds, it’s far too early to say how much I’ll actually get out of these advertisements; on that note, since I use WordPress’ Free plan/tier, there were always advertisements on my site (I didn’t get any revenue from those ads, however). Given how most people likely use an ad blocker (myself included), this will further reduce the amount of revenue I can generate from this blog. WordAds will only pay out advertisement revenue when earnings accumulate past $100, which means I won’t actually receive anything until that point… and who knows how long that will be.

Unlike other advertisement platforms, I do not get real-time analytics of ad traffic, and statistics for the month are only updated near the end of the next month (in my case, this means I will not see any information on November’s earnings until the end of December). One common complaint about WordAds is the lack of customization for ads that will be shown; on the flip side, the advertisement system does all the back-end work so I don’t need to lift a finger in that regard.

This is the first time I’ve ever tried online traffic advertisements and site monetization, so saying I’m inexperienced in this field is a bit of an understatement. However, I’m curious as to where this will go, and how this will affect my reader base.

What’s your experience with ads on my blog? I’d love to hear your comments on it, especially as time goes on.