The 18650 lithium-ion battery, named after its size (1.8 cm diameter and 6.50 cm length), has seen continuous improvements in capacity over the years. Nowadays it’s easy to get capacities in excess of 3000 mAh, with the highest capacity cells reaching and even exceeding 3500 mAh.

Earlier this year, XTAR, a Chinese company specializing in batteries and battery accessories, announced the newest and highest-capacity addition to their protected 18650 lineup, boasting an impressive 3600 mAh capacity and aimed towards medium-drain applications like power banks and LED flashlights (sorry vapers, this one’s not for you!). After submitting my name for consideration, I was one of a few people selected to receive some samples for review; considering how much I’ve blogged about lithium-ion batteries on here, it only makes sense to talk even more about them!

FULL DISCLOSURE: XTAR provided these batteries to me at no charge for an independent review. They had no editorial control over this review, I have not been compensated monetarily, and all opinions expressed in this review are my own.

XTAR’s new 3600 mAh protected 18650 comes in a discreet box, holding nothing more than the battery itself. Like all protected 18650s, the protection comes in the form of a small PCB (printed circuit board) that is stacked on the negative end of the bare 18650 cell, with a metal strap running up the cell’s body to the positive terminal, where a small “button top” is attached to improve electrical connectivity for spring-loaded battery holders. 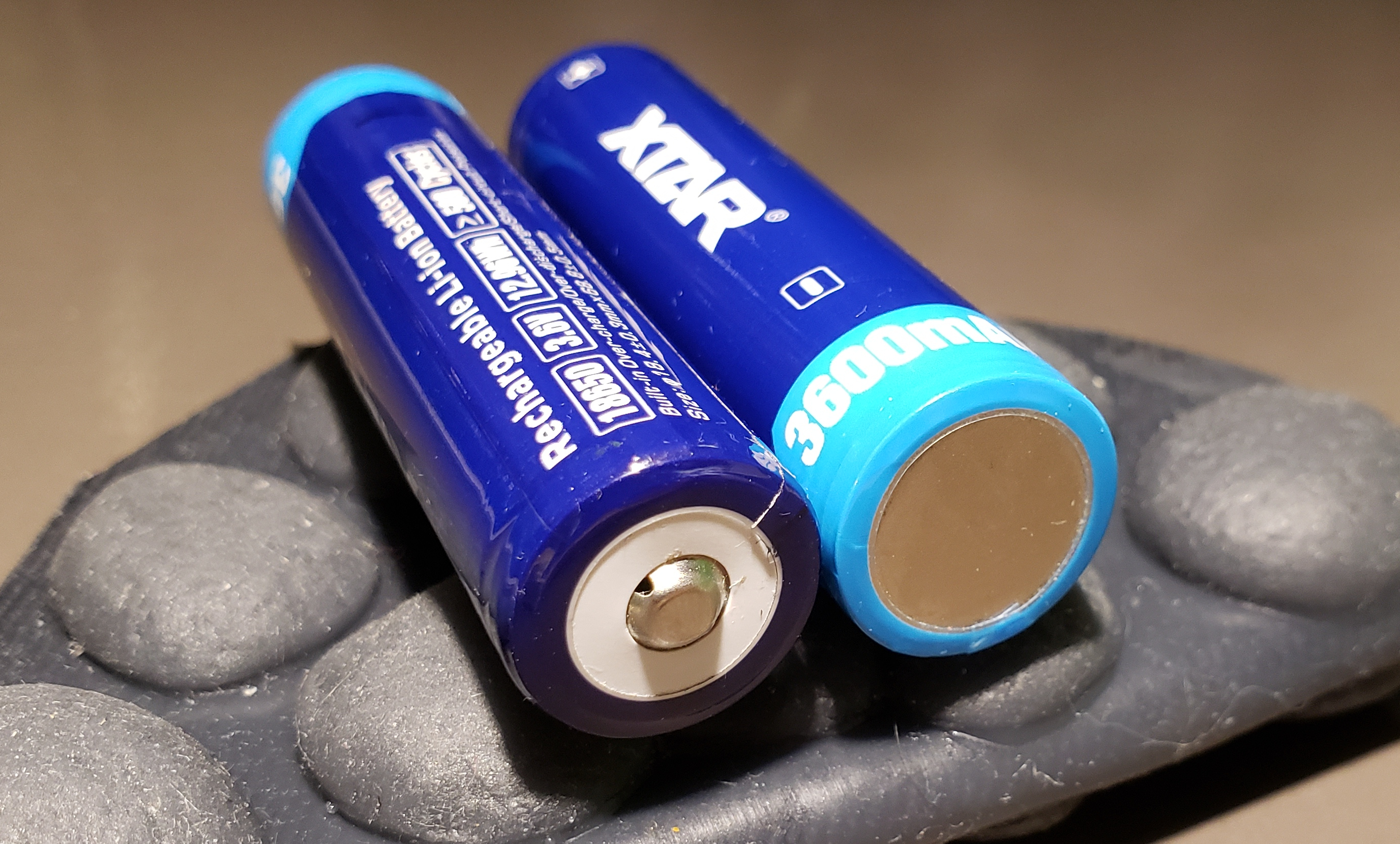 Positive and negative terminals of the XTAR 3600 mAh protected 18650 battery. Note the added length due to the button top on the left, and the protection circuit and protective plate on the right.

I was able to request an official datasheet for the battery, which I have included at the end of my blog post. My main goal with this review is to test the batteries from an objective perspective, using dedicated test equipment rather than in-application testing in devices like flashlights. If I do decide to perform such tests, I’ll add a second part to my review (stay tuned!).

The capacity numbers seemed a bit low to me, even for an incomplete discharge to 2.75 volts instead of 2.5 volts. I decided to continue testing with a more accurate (and calibratable) battery fuel gauge board, revealing the true capacity of this battery… and it’s as good as the manufacturer promised!

After realizing that my dedicated battery analyzer wasn’t quite as accurate as I wanted, I decided to use a battery fuel gauge board that I had more confidence in. I had previously built a board based on the Texas Instruments bq78z100, a dedicated battery management system (BMS) on a chip, aimed at 1S and 2S battery packs. This allowed me to calibrate the voltage and current measurements against my Agilent/Keysight U1253B multimeter and therefore get the most accurate results, as I can also program the bq78z100’s autonomous protection features to provide precise control over the discharge cutoff voltage during testing.

XTAR 3600 mAh protected 18650 battery connected to the bq78z100-based fuel gauge board. (note: actual setup is different than as pictured)

Using this circuit, I was able to get multiple measurements of the battery’s capacity with the help of a Texas Instruments GDK (Gauge Development Kit) as a charger and adjustable load for some of the capacity tests; and an Arachnid Labs re:load 2 adjustable constant-current load, with some additional forced-air cooling for the higher discharge rates.

I suspect that if I had a more, erm, “professional” setup, I could extract even more capacity from the battery, as additional resistance between the battery and the fuel gauge board will cause a voltage drop and subsequent loss in measured capacity.

This is one of the most interesting test results, in my opinion. Many 1S/”single-cell” devices can’t take full advantage of modern NMC (nickel-manganese-cobalt) cells whose end-of-discharge voltage is below 3 volts, and the following chart helps quantify how much capacity can be extracted if one stops earlier than that. One advantage of reducing the depth of discharge, however, is that it can extend the battery’s cycle life and reduce the amount of capacity loss it experiences with age. As long as you discharge all the way to 2.5 volts and at a modest rate, the XTAR 3600 mAh battery achieves its rated capacity, and then some!

Note that “relative” and “absolute” percentages correspond to the 2.5 volt discharge values for each row and the C/10 rate, respectively. The curve for the C/5 discharge rate ends early, as that data was collected with my Texas Instruments GDK (Gauge Development Kit), which has a hardcoded discharge cutoff at 2.9 volts. One oddity of the 1C curve is how it actually gets slightly more capacity than the C/2 rate; I suspect this is because the internal resistance of the battery was decreasing due to cell heating, allowing the lithium ions to travel across the cell’s separator more easily. Additionally, the capacity under-reporting issue I was having with the EBL tester is more visible in this chart, since a rough extrapolation would bring the discharge curve at 500 mA around 3550 mAh, which is a fair amount higher than the measured ~3340 mAh. If I have the time to recollect some data, I’ll add it to the chart. 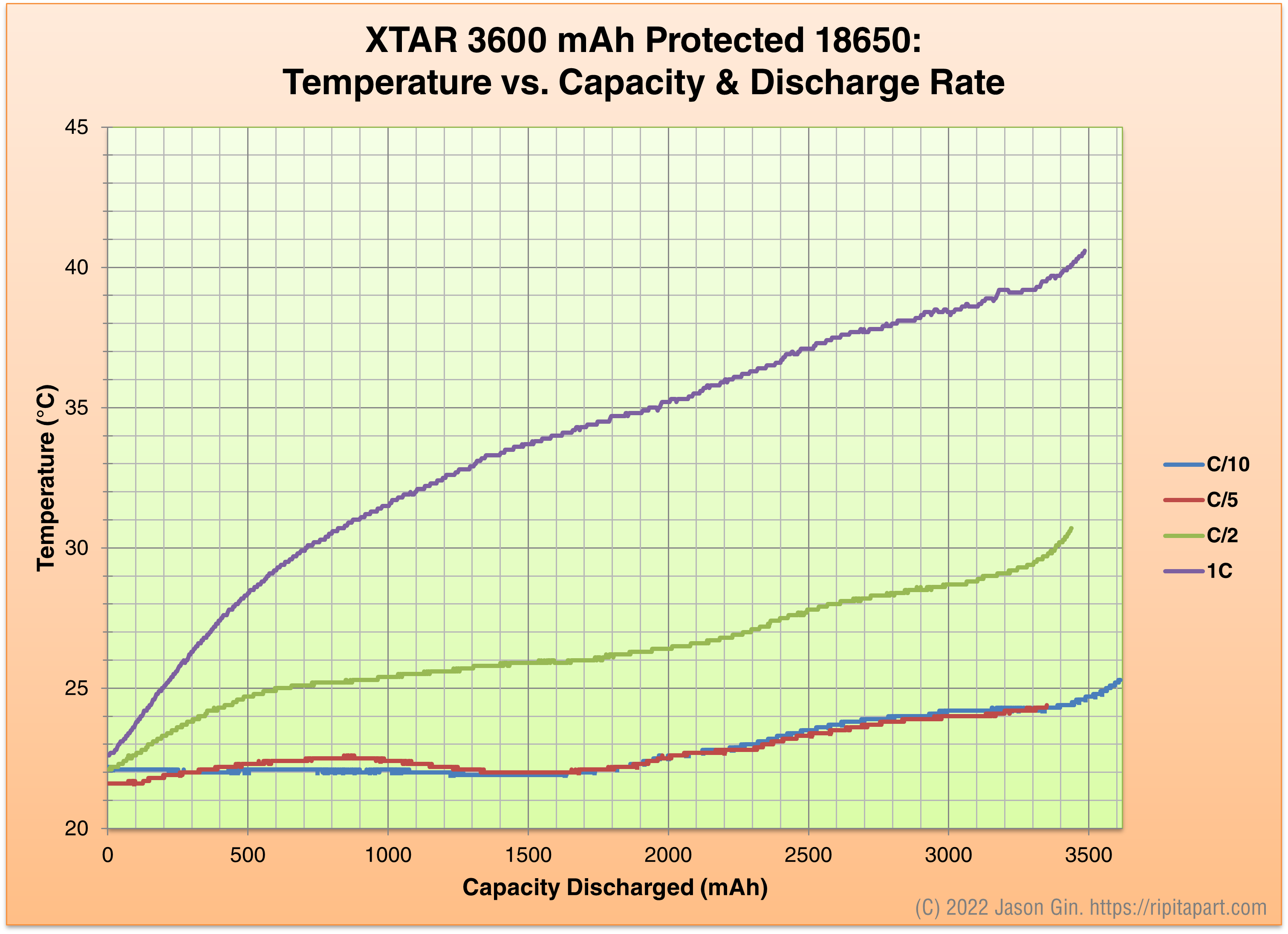 After running the data taken at a C/10 discharge rate through TI’s online tool, GPCCHEM, I was able to get two chemistry IDs that would allow me to get an accurate model of the cells for use in their Impedance Track line of fuel gauges.

Don’t pay too much attention to the details; they are provided for informational purposes only and mainly of use for those that want to use these batteries with TI’s fuel gauge chips. The specific models listed are not a guarantee that these batteries actually are that cell model, but it does confirm that our data is otherwise trustworthy; both listed models are high-capacity cells and use a chemistry system containing nickel, manganese, and cobalt (NMC for short), and such chemistries tend to have a relatively high capacity at the expense of lower terminal voltage (3.6 V nominal, 2.5 V at end of discharge; versus the typical 3.7 V nominal and 3.0 V end of discharge).

After my testing, I can confidently say that XTAR’s 3600 mAh 18650 really does achieve its rated capacity. As long as your target device is capable of discharging to 2.5 volts and at a modest rate, it will be able to get the most out of this battery.

If you want to purchase this battery, you can do so from their online store: https://xtardirect.com/products/18650-3600mah-battery?VariantsId=10393

At the time of writing, XTAR is selling this battery at $11.90 USD for a single battery, or $23.80 USD for a two-pack with carrying case.