As seen on Hackaday!

The ball grid array (BGA) chip package has been instrumental in getting modern electronics to fit in smaller and smaller spaces, as it uses tiny balls of solder on the bottom of the package to make electrical connections, instead of copper leads on the edge of the chip package. This allows for hundreds of connections to be made in a small amount of PCB area, but their size also makes them very vulnerable to damage as well. 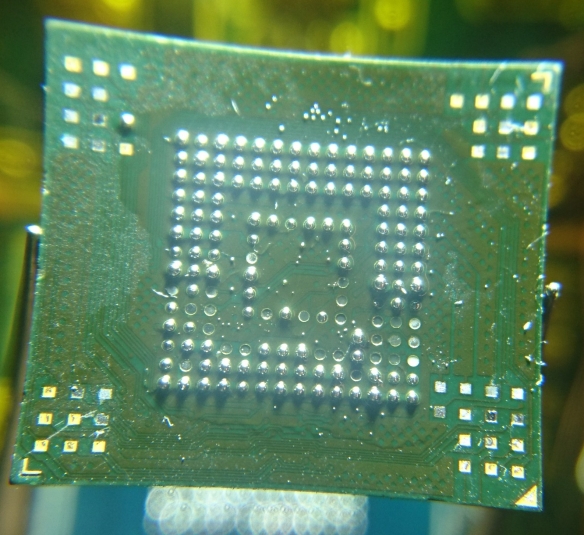 One common way for BGA chips to become damaged is called “pad cratering“, where the copper pad on the package’s substrate (basically a wafer-thin circuit board) separates and leaves behind a crater.

In the case of eMMC (Embedded MultiMediaCard), its package type is known as an FBGA (Fine-pitch Ball Grid Array), so the area of each pad is very small (0.4 mm in diameter!); it doesn’t take much at all to crater the pad – even gently removing solder with solder wick and generous amounts of flux can still cause damage! Most of the pads on an eMMC package are unused, but if any one of the DAT0, CLK, or CMD pads are damaged, then the chip is rendered unusable, even if the chip is placed into a socket for data recovery. If the DAT1-DAT7 pads are damaged, data recovery becomes much slower as the chip is forced to use fewer lines to transmit data (the MMC standard supports data over 1, 4, or 8 lines).

However, there is some hope. Many FBGA packages, including eMMC, use pads that are SMD (solder-mask defined); this means the solder mask is what defines the size of the pad, not the copper itself. Therefore, when the pad gets cratered, often there is a “halo” of copper left behind that still has a chance of getting an electrical connection.

Top and side diagram of normal and cratered BGA pad, with ZIF socket

Detail showing the pins in the eMMC ZIF socket

The trick is how to to get a flat conductive area that a chip socket can use to get a reliable connection (without a copper pad, soldering is no longer an option). The eMMC socket adapter I used breaks out the eMMC onto an MMCplus-shaped PCB that can be inserted into any commercial SD card reader.

Filling in the Blanks

There are a few possible materials that can be used to restore contact area on a damaged BGA pad. One possible option is a silver-filled conductive epoxy, but I have not tested its efficacy; an additional consideration is that the volume of the filled-in crater might not be enough to get a filling with sufficiently low resistance for a good connection.

Another option is using solder paste, which I used in this case. Unfortunately, solder’s surface tension is our enemy when trying to fill in a flat area (it wants to form cohesive balls and therefore won’t want to stick to the ring of copper left around the crater), so a means of forcing the solder into the crater requires something flat, rigid and capable of handling the high temperatures experienced during soldering.

At first I tried Kapton (polyimide) tape, but that was a massive failure since it didn’t have the rigidity to stay flat when the solder paste began to melt, and the liquid flux rendered the adhesive useless.

The solution to the issue came in the form of glass. Specifically, I used very thin (0.15 mm thick!) glass “cover slips” normally used to prepare specimens for viewing under a microscope. These can be very inexpensive and one can obtain hundreds of them for a few dollars. The key is to fill the craters with the solder paste by using a knife as a squeegee, then placing the cover slip on top of the eMMC and reflowing it.

It took a few iterations for the pads on some of my eMMC chips to be restored sufficiently, as the volume taken up by the solder will be less than the paste and its accompanying flux. It doesn’t have to fill the entire crater – it just needs to be enough for the eMMC socket’s pins to make a solid connection. 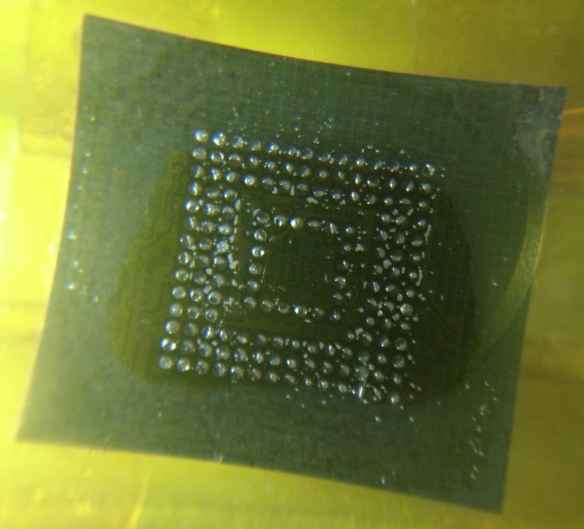 The high-density nature of modern BGA chips is both a blessing and a curse. When trying to do data recovery from devices that use such tiny chips, such as eMMC or UFS Flash storage, sometimes the desoldering process is too much for the chip’s pads to handle. With some ingenuity (and thin glass), it might be possible to temporarily restore enough conductive pad area to get the data off with the help of an eMMC socket.