After trying out the WordPress Personal plan earlier this year, I was curious as to whether upgrading to a paid plan would result in improved earnings when using the WordAds revenue program.

It doesn’t. If you’re making money on the Free plan, stick to it.

Considering it’s 4:10 AM at the time of this blog post, I should be already in bed but I was up doing some repair work. I got an email saying my subscription for my blog was expiring and I instinctively paid for it, but realized it was for the WordPress Personal plan I was planning to ditch once it lapsed. Immediately after paying I cancelled the subscription, thus ending the plan earlier than I intended. At least the refund process was quick and easy. 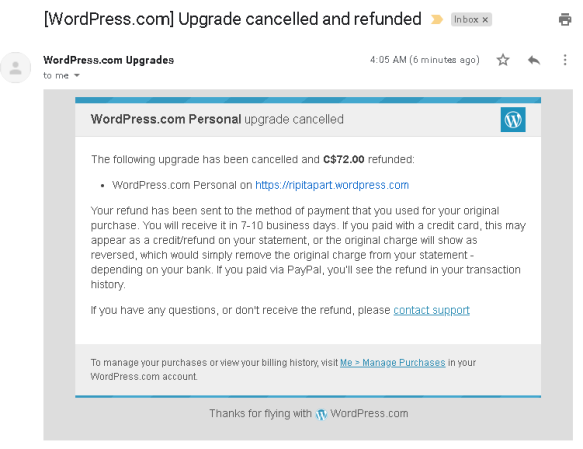 Ever complete a purchase and immediately think “Wait, this isn’t what I intended to buy”? That was me just now.

Time sure flies by – it’s already been almost two years since I first joined the WordAds program, and over a year since my last WordAds update. Let’s see how we’ve done…

WordAds stats for 2019 (January to September)

After ending 2018 on a high note, I had good feelings about how well 2019 was going to pay out. I was wrong – it’s worse than it’s ever been before. My CPM has fallen to less than 30 cents, even despite a few popular posts like adding PCIe to the Atomic Pi, or fixing a liquid-damaged MacBook Pro.

This year to date I’ve earned $97.56, with a total ad view count of 397,780. If I multiplied this by last year’s average CPM, I should have earned $218.78 – talk about a massive cutback! This is coupled with the fact that the majority of the ads that do get served are the low-quality chumbox kind, like the infamous “gut doctor” ad that would repeat itself over a dozen times within a few pages’ worth of blog posts.

At the same time, I guess I shouldn’t complain too much about my earnings. Another WordPress blogger earned 18 cents in March 2019. Even if I’m not breaking even on my hosting fees, it still helps.

Simply put, 2019 has not been a particularly prosperous year for WordAds revenue – or at least in my case it isn’t. Hopefully the rest of 2019 turns out better, and likewise for 2020…

Oh my, it has been a while since the last update, hasn’t it?

Results for February to June 2018

Since my last report, I managed to earn $45 in one month after getting my blog post featured on the r/hardware subreddit, which then made its way to Hacker News (a news aggregation site), bringing the most traffic to my site in many years; March 2018’s view count was the second highest on record, bested only by June 2014’s 25,051 views which were not monetized. I even received my first payout on May 29th.

However, the rest of the months have been less fruitful, especially as of late. Since May, my monthly ad revenue has dropped below $10 USD/month. I thought that the boost in traffic from March would result in more views after the fact – I could not have been more wrong.

Let’s look at the data (note that am now also tracking statistics for ads per viewer and visitor):

Since my last update, I noticed that my pay-per-impression rate was steadily decreasing, and that has not changed since; although it has leveled off mostly, it is still decreasing.

The data sends a clear message: in order to continue receiving an appreciable amount of ad revenue, I need to keep posting and getting my blog posts published on various outlets; additionally, returns from existing content is not steady but instead continuously declines even if viewership does not appreciably fluctuate from month to month. (Granted, that’s probably common sense and I just need to get back in gear and make more posts – many of which are still in draft form.)

Another month has passed and that means another round of ad revenue trickling in.

This is rather interesting – despite getting more views than December 2017, the pay rate was lower than before!

Curious to see what the dollar-per-impression rate was for each month, I tabulated the results and graphed them:

That is a pretty linear drop in dollar-per-impression rate. Perhaps this is due to ad market fluctuations, or maybe WordPress is “incentivizing” increased viewership to maintain ad revenue. Who knows? Either way, it will be interesting to track this trend as time goes on.

Over a month has passed since my first post about seeing where the WordAds train will take me and my blog, and the first (meaningful) payout numbers have rolled out.

Assuming that I receive the same number of views per month, $15/month * 12 months = $180 USD/year. With this amount of revenue, my blog can finally run itself!

If I assume that my current view count doesn’t change, this would leave me with a little over $50 USD in pocket change by the end of the year. Perhaps this money could be put to use to buy some more things to make blog posts with – maybe some iPhone batteries or an eMMC module or two…

Once again, thanks to all of my readers – I couldn’t have done any of this without you! 😀